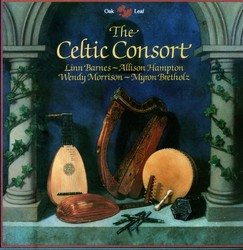 During the Renaissance, diverse forms of instrumentation were collectively known as a "broken consort," which might include string and wind instruments as well as percussion. The Celtic Consort appeals to this tradition in form, while in substance we draw upon the vast repertoire of traditional music as well as the music of the courts. We employ new and heretofore unheard combinations of instruments realizing a new and exciting musical synthesis.

The Celtic Consort allows the lutes, once relegated exclusively to the realm of the European courts, to explore new and profound musical worlds. Similarly, the tinwhistle, concertina, and bodhran, traditional instruments in the Celtic world, are now presented in new and unusual settings which retain their essential energy and integrity, while bringing them into a different focus. The Celtic harp, which has always been most comfortable in the relatively formal settings of the manor house of 16th, 17th, and 18th century Ireland, Scotland, and Wales, is now cast in a somewhat more eclectic role addressing itself as well to the music of the Italian Renaissance and the English country dance tradition.

Turlough O'Carolan, the blind 18th century Irish harper-composer, accounts for a sizable portion of the selections on this album. Carolan wrote much of his music in honor of various patrons throughout Ireland. These pieces are for the most part termed "planxtys," meaning, in Irish Gaelic, "in praise of" or "in honor of" some individual.

Tielman Susato, Cesare Negri, and other anonymous composers of Renaissance Italy often did not specify instrumentation but rather provided manuals of music in both lute tablature and staff notation. Clearly, the goal was to make the music available to a wide variety of instruments.

Finally, we include music from the lively country dance tradition of England. John Playford, in his "The English Country Dancing Master" first printed in the 17th century, collected many of the dance tunes of rural England. This music might be accompanied by anything from a single recorder or whistle player to an entire consort of musicians. Sellenger's Round in two settings is an example of how certain pieces exist in both the court and country traditions. The Johnson lute duet is typical of 16th century lute writing, in contrast to the treatment we have given the country dance version.